Power Gating is a technique used in integrated circuit design to reduce power consumption, by shutting off the current to blocks of the circuit that are not is use. 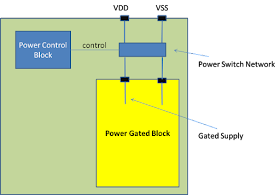 Power gating is used to save the leakage power when the system is not in operation. This is accomplished by adding a switch either to VDD or VSS supply. When the design is power gated it literally means the block is powered OFF. Powering OFF a design block is the most beneficial technique of all the low power techniques because you dissipate near zero power. Near zero because the switching circuit used for implementing power gating still dissipate leakage power even in power gating mode. The control to the power gating switching circuit is generated by the Power gating control block.

When VDD is gated the power switch is called the “header” switch. Similarly if VSS is gated we call it as “footer” switch. To gate VDD we use PMOS transistor where as to gate VSS we use NMOS transistor. In reality a single switch is not sufficient to power the whole design. Hence many parallel switches are implemented to achieve low voltage ramp up time and avoid other IR drop issues.

Ramp Up Time: The time required for powering up a shut down power domain is called ramp up time. This ramp up time should be as minimum as possible. The power network design should be done such a way that the ramp up time is less which is usually done by increasing the number of power switches or sleep transistors.